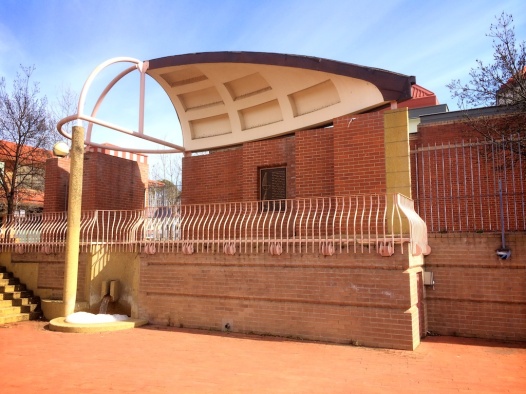 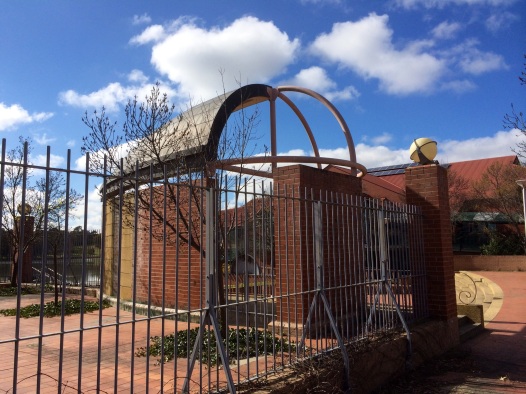 My daily walk to my workplace leads me past this almost forlorn memorial, dedicated to the colonial architect and convict Francis Greenway, after whom the suburb in Canberra in which it is located is named.

The water continues to flow out of the fountain beneath it and the memorial plaque is still in its place. Otherwise, it’s now looking rather tired and grubby with grey gates that don’t lead anywhere and overgrown vines which snake their way around the courtyard behind the memorial.

The streets of Greenway are all named after architects.

The architect incorporated characteristic hemispherical ‘domes’ into his design works. This is reflected in the architectural dome above the memorial.

Greenway was transported to Sydney, Australia from the United Kingdom in 1814 to serve his sentence of 14 years after being convicted for forgery.

As a convict, Greenway was commissioned to undertake the design and was responsible for the construction of the original Macquarie Lighthouse, which was completed in 1818. He was subsequently emancipated after the success of the project by the Governor Lachlan Macquarie.

Between 1881-83 a new lighthouse was constructed due to the poor quality sandstone used in the original lighthouse, causing it to deteriorate. The replacement lighthouse was based on Greenway’s original design. Greenway went on to design other notable colonial public works in Sydney, which remain in use presently including Hyde Park Barracks and St James Church.

After a dispute with Governor Macquarie, Greenway became destitute in 1835 and died in 1837, aged 59. He is buried in an unmarked grave.

The suburb name “Greenway” was gazetted on 17 October 1986